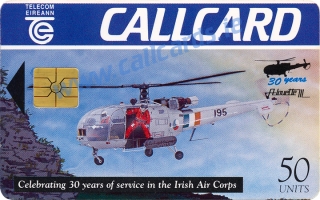 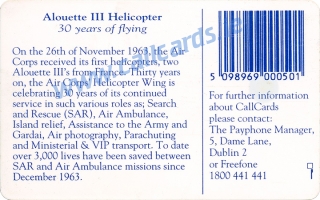 Callcard commemorating the Alouette III Helicopters' 30 years of service with the Irish Air Corps. A special pack was issued to raise money for the Museum Fund. The pack was limited to 195 copies and was sold for between IR£25 - IR£75. This contained a mint Callcard and a card signed by the pilot. The cards were flown in Helicopter 195 on a misson from France to Baldonnel. They were available from the Irish Air Corps.

All 7 Alouette III Helicoptors were in service for almost 44 years with the Irish Air Corps and were part of the Army Support Squadron known as 302 Squadron. The Alouette's served on a vast array of missions, such as Search and Rescue (S.A.R.), Air Ambulance, Security and more. The fleet were retired at a stand down parade in Casement Aerodrome (Dublin) on the 21st of September 2007.